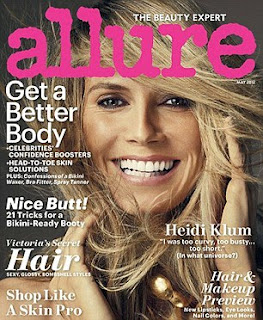 Heidi Klum sizzles on the cover of the latest Allure. At 38, and after four children, Heidi is still worthy of her supermodel title! She showed off her lean limbs and toned stomach in the shoot for the magazine. Heidi also had a lot to talk about in her interview. 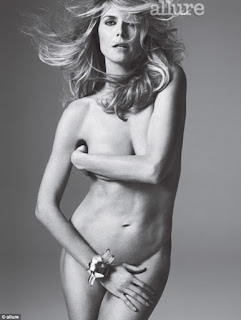 She told Allure that she has never gone under the knife, saying how proud she is that she is 100% natural and hasn’t fallen under the pressure to get surgery like many other celebrities. She told Allure ‘I’m proud to be able to say, in this day and age, I haven’t done anything. Everyone has a view of what’s not pretty and [plastic surgery] just doesn’t look pretty to me. Especially when I see it on really young girls.

I don’t want to name names, but it’s like, wow, I remember you five years ago, looking to me so beautiful, and now it’s like … who is this person? And I know girls half my age who do it. What are they gonna do at 40 or 50, when the s*** really hits the fan?” 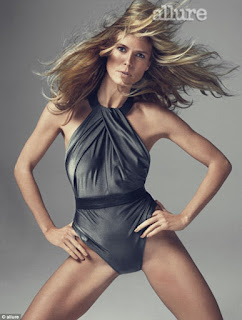 The 38-year-old wasn’t always a sought after model for the runway but Heidi really has created a hugely successfuly career for herself, being the most popular Victoria’s Secret Angel of all time! to

“I was too curvy and too busty and a little too short,” Klum explained. “And I was a little bit self-conscious about it. But I was by no means heavy, I just – well, you have hips and boobs, and that’s it. Haute couture, you don’t really see girls with big boobs. And I always wanted first to be a model. So I had to say, ‘OK, you’re going to find other things to do in this industry, or it’s maybe not my industry.”

Heidi told Allure that she remembers being turned away from a Micheal Kors show for looking wrong. Ironically Kors is now a co-host on hit show ‘Project Runway’ with Heidi. 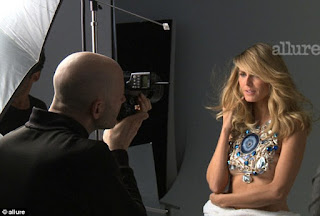 Heidi is also nursing heartache after recently splitting up with her husband Seal. The couple split in January after seven years of marriage and Heidi described the split as a ‘curveball’. She told Allure how the shock of the break-up still hasn’t fully sunken in and she is finding adjusting difficult. She told the magazine ‘Sometimes life throws you a curveball, and then you just figure it out and deal with it, but my dream always was that – to have the perfect family and have lots of children and a beautiful garden and trampolines and swings and things. I had dreams of how I wanted things to be and planned for things and, as we all know today, they don’t always turn out as you dreamt them in your head.’ 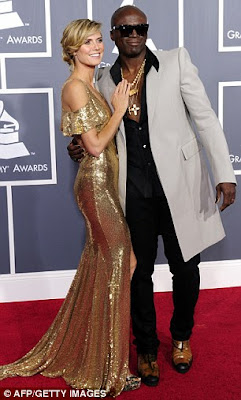 Heidi – who raises children Leni, seven, Henry, six, Johan, five, and two-year-old Lou with Seal – added she doesn’t feel any resent about the split, and she is looking to the future trying to figure out her plans. She added: ‘I don’t resent anything that ever happened. Things just turn out the way they turn out.’

The May issue of Allure is on stands in America from April 24th.