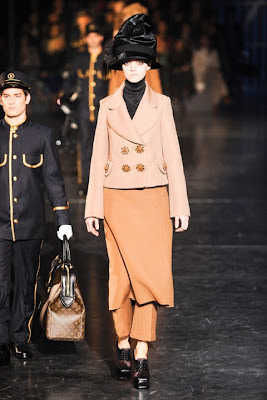 The spectacular Louis Vuitton show took six weeks to construct and was more of a theatre production than a catwalk show! As the clock on the faux platform struck 10 a huge life-sized Louis Vuitton stream train rolled into the Cour Carree du Louvre, complete with dry ice steam! Passengers/models then stepped off. 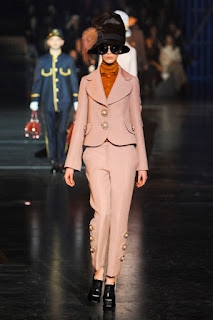 As each model descended she was helped by a porter who was carrying her bag. These ranged from sheared fur Speedys to box vanity cases to gorgeous oversized hold-alls. All the bags in the show were to die for! 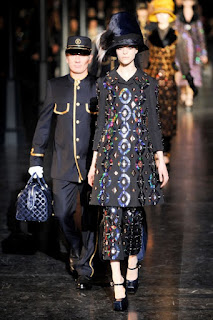 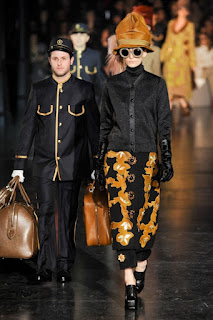 Then there were the clothes. The collection itself was to die for! The silhouette of the show was a dominant and striking one, opulent jackets and coats featuring heavily. The trend of layering was also a recurrent one, coats and jackets being layered over long skirts, cropped kick flares and dresses. The turtle neck also made numerous appearances.

The embellishments on the pieces were the epitome of luxury, from oversized jewelled buttons which appeared on the coats to the jewels on the trouser hems. Each model also wore huge silk bonnet hats some with large ostrich feathers attached. 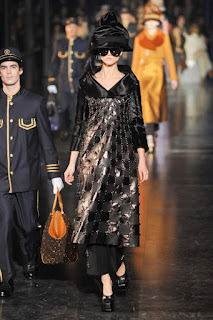 Travel is so central to the whole Louis Vuitton brand and it’s history and Marc Jacobs, the showman of the stage, really ran with this theme. He transformed a catwalk show into a broadway-worthy production. Hats, or rather extravagant feather-adorned bonnets, off to Marc Jacobs and Louis Vuitton! 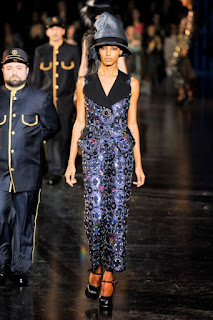 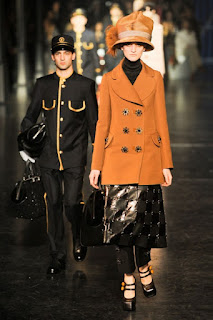